Cancer and the Nobel-winner technology CRISPR

Cancer is a broad term, and it describes a group of diseases that result when changes to the DNA cause the uncontrolled growth and division of specific cells in the body.

With over 18 million new cases and nearly 10 million deaths each year (according to GLOBOCAN 2018), cancer is the second leading cause of mortality in the world and a rising burden for individuals, families, communities and healthcare systems. In economic terms, this group of diseases is associated with the greatest costs and loss of workforce due to morbidity and premature death (over 1.5% of the global GDP).

In geographical terms, Europe is the second most affected region after Asia, with around 3.7 million new cases diagnosed and 1.9 million deaths annually (predominantly from lung, colorectal, stomach, liver and breast cancer). Moreover, a growing and ageing population together with risk factors linked to the lifestyle in its industrialised countries are driving a rise in cancer incidence. If this trend is not stopped, it could become the leading cause of death in this continent soon (4.3 million new cases are expected by 2035) and cost many more billion euros each year.

Cancer as a health priority in the EU

As a result, there is an urgent need for more effective, accessible and resilient healthcare systems and the European Union member states must ensure that all their citizens have access to effective cancer prevention and care.

In this fight against cancer, investing in research and development has to be a priority to offer more effective preventive, diagnostic and therapeutic alternatives to patients, not only in Europe but also globally.

This is reflected in the inclusion of Cancer as one of the five research and innovation missions in the next Horizon Europe framework programme for the period 2021-2027. Such missions, as we said before, aim to solve the greatest challenges in the world, and secure a brighter future for human societies. 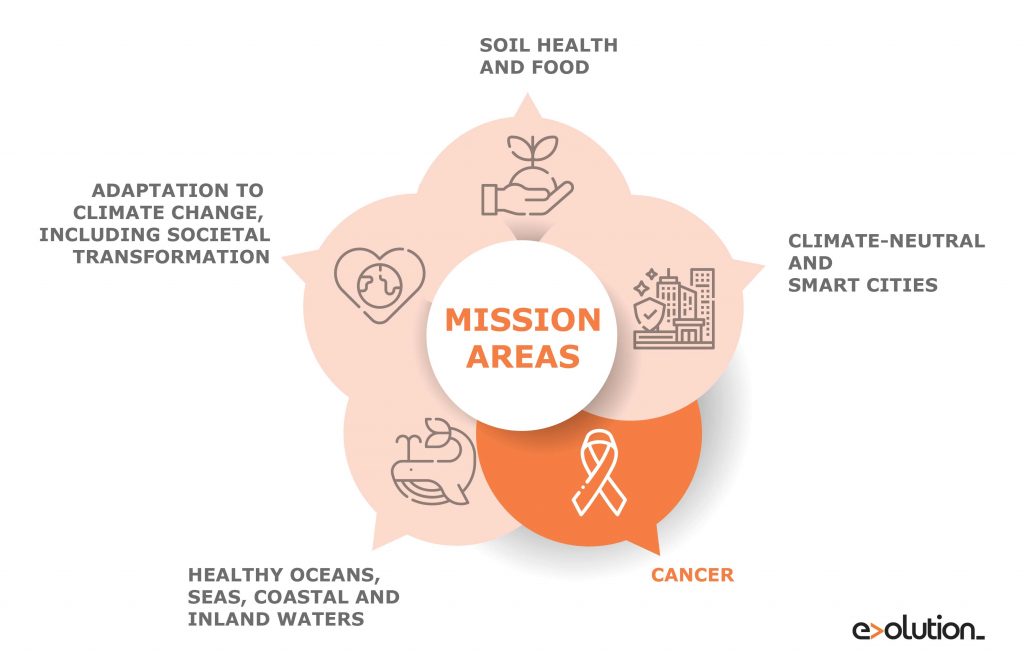 The objectives of the cancer mission are to unite countries to substantially reduce this disease impact, to improve patients’ quality of life, and to achieve a 10-year cancer-specific survival. The mission’s targets by 2030 include to save 3 million more lives, allow people to live longer and better, reach a deep understanding of the disease, improve prevention, optimise diagnosis and treatment, and ensure equitable access across Europe to all of this.

By joining efforts, more people will avoid getting the disease, more cancer patients will be diagnosed earlier, and they will suffer less and have a better quality of life after treatment.

These kinds of initiatives are pushing forward the development and implementation of highly innovative technologies, as well as promoting a more multi-disciplinary approach to successfully exploit the most pioneer scientific inventions in healthcare.

CRISPR-Cas9: how genome editing is playing a crucial role in cancer

Last October, the whole world learned about the decision from The Royal Swedish Academy of Sciences to award the Nobel Prize in Chemistry 2020 to the researchers Emmanuelle Charpentier (Max Planck Unit for the Science of Pathogens- Berlin, Germany) and Jennifer A. Doudna (University of California- Berkeley, USA), for the development of the genetic scissors CRISPR/Cas9.

This disruptive and precise technology for genome editing developed thanks to the work of these and many other researchers (including the Spanish Francisco Mojica, who discovered the system in archaea and named it in 2005 as CRISPR), has revolutionised the molecular life sciences in the last decade.

Gene editing allows scientists to change the DNA from an organism by adding, removing or altering specific sequences in the genome, and it has multiple applications.

The CRISPR technology is based on a naturally occurring process in bacteria and archaea, which helps them to become resistant to attacking viruses (i.e. bacteriophages). It can be comparable to an immune system, and these microorganisms keep DNA fragments from a previously infecting pathogen to recognise new attacks and quickly activate an associated enzymatic process to cleave the foreign DNA targeted. 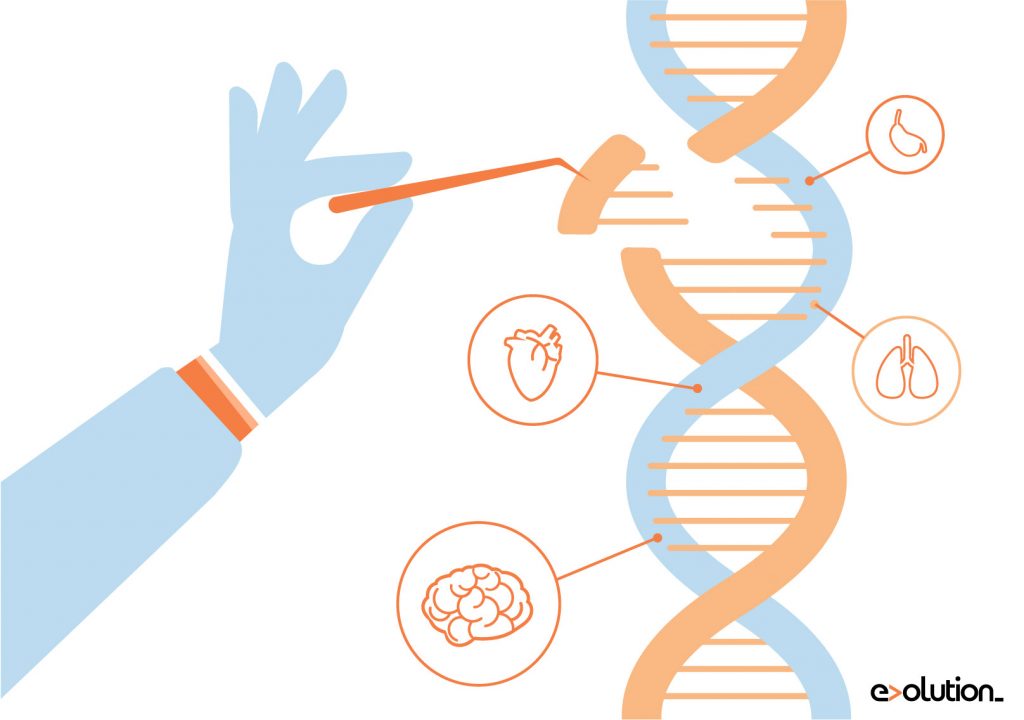 By 2012, researchers such as Doudna and Charpentier realised the potential of this system and adapted it to function in the cells of other organisms to create a new technology for genome editing. Although there are some variants now, the CRISPR-Cas9 core technique includes two main elements: a piece of RNA (guide RNA or gRNA) to identify the target DNA sequence and the enzyme Cas9, which works as a pair of scissors to cut the DNA and allow to add or remove genetic material in that specific location.

The big excitement in the scientific community caused by this technology is because, although there are many other tools to edit the DNA (e.g. conventional homologous recombination), this is a significantly faster, cheaper, more accurate and effective process. In the last ten years, it has been successfully used to introduce deletions or insertions in the DNA of diverse cell lines and organisms such as human, bacteria, zebrafish, C. elegans, plants, yeast, Drosophila, monkeys, rabbits, pigs, rats and mice.

CRISPR systems represent a new class of molecular tools that have changed how scientists manipulate the code of life on behalf of humanity. Beyond primary and applied research, the industry is also highly interested in exploiting its potential in pharma, agriculture, energy, materials manufacturing and many others.

Regarding human health, genome editing with CRISPR is of great interest in the prevention and treatment of diseases. So far, researchers have been focused on testing and improving its safety and efficiency, as well as in understanding diverse diseases using modified cells and animal models. It holds promise in both single-gene disorders such as cystic fibrosis, haemophilia, and sickle cell disease, and also in the prevention and therapy of more complex diseases such as cancer, heart disease, mental illness or human immunodeficiency virus (HIV) infections.

CRISPR can be a game-changer in cancer

The CRISPR-Cas9 system is becoming a widespread, practical, and useful tool against many types of tumours, and it has accelerated cancer research (mostly leukaemia and lung, breast or liver cancer). For example, it is being employed for the fast, effective and cheap generation of cancer cell lines and animal models, which help to elucidate the underlying molecular mechanisms of the disease.

This gene-editing strategy is also very useful to study synergistic interactions between genes involved in cancer, which can serve to avoid drug resistance and enhance drug therapy. Likewise, it can serve (combined with deep sequencing or cellular biophysical assays) to reveal the mechanism of action of drug candidates and to validate their effectiveness and safety.

But maybe one of the most exciting potential applications of this incomparable technology is its clinical use to target cancer-causing genes and cure the disease. From the about 11 clinical trials currently running (phase I or phase II), at least 7 involve immunotherapies. In this approach, the CRISPR-cas9 system serves to produce specifically designed immune cells (e.g. T-cells), for example by knocking-out genes related to negative regulation, and which are then used to kill tumoral cells very effectively.

In a process that can seem taken from science fiction, the immune cells are filtered out of a patient’s blood and genetically engineered using CRISPR in the laboratory (ex vivo therapy). The designed cells are then re-introduced into the patient’s body via injection, to target cancerous cells and reduce tumour growth.

Another tactic consists in editing genes implicated in cancer progression inside the tumoral cells, which can become a widespread gene therapy tool to stop the disease (in vivo) in the future and once security issues are properly assessed. Currently, the short-, mid-and long-term efficacy and safety of all this and all the other alternatives are being explored. Although there is still much work to do, the results obtained so far show that CRISPR-edited cancer therapy is really feasible.

All in all, we are only beginning to elucidate the real impact that CRISPR-based genome editing tools can have in cancer research, detection, treatment and mitigation.

CRISPR: What are the next steps?

The discovery of the mechanisms underlying CRISPR in prokaryotes and its subsequent adaptation as a new technology for gene editing can be considered one of the revolutions of this century. This new toolkit for the manipulation of the DNA in living organisms is allowing scientists from all over the world to accelerate their research workflows, redefine their objectives, access cheaper techniques and explore a kaleidoscope of new options.

Its applications in human health are unmeasurable, and it can completely modify the current trends for critical diseases such as cancer, in which safety has been already proven, and help improve many people’s lives worldwide.

Moreover, these applications of genome editing systems such as CRISPR-Cas9 are countless and constantly expanding. For example, it is worth mentioning the role this technology has played in the study and fight against the current crisis caused by the coronavirus SARS-CoV-2, and also other fields such as agriculture and food are benefiting from its implementation. The possibility of designing living organisms on-demand has been identified too, and it has opened up an ethical debate about human applications, which has only begun. 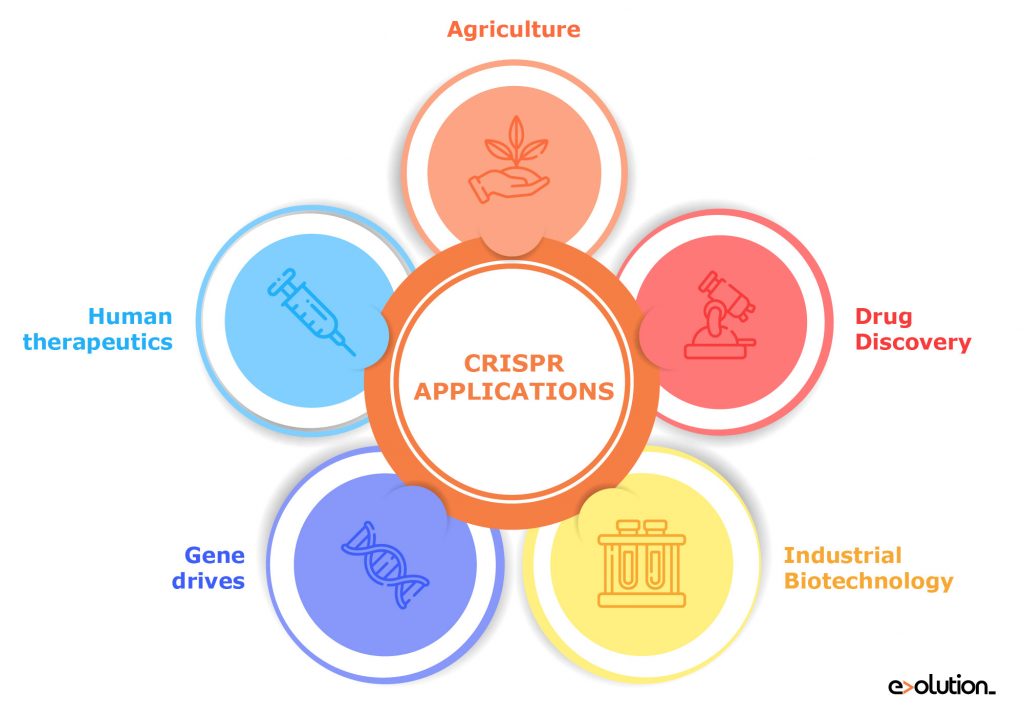 Although it’s still at an early phase, preliminary results obtained using CRISPR in patients are promising and are driving further the study of its full potential. To go on, many efforts are now focused on refining the methods related to CRISPR-mediated DNA editing, on enhancing its specificity and effectiveness while guaranteeing no negative off-target or side-effects are produced in the treated cells/individuals. Similar mechanisms are also being searched in other microorganisms. Thus this and other genome editing tools are only going to become more powerful.

Thanks to a reduced legal burden, cheapness, robustness and high target specificity and programmability, several start-ups have already surged to exploit the commercial possibilities of CRISPR systems in the industry. And we know that they are not alone in the mission of bringing the results of this breakthrough to the market, since public institutions like the European Commission have highlighted the relevance of reducing the impact of diseases like cancer.

There is no doubt a new era in the manipulation of organisms’ genetic information has begun, and CRISPR for sure will be pivotal in the marathon race to solve the most crucial challenges and development goals in Europe and globally in the 21st century. Let’s see what the future holds.