BREXIT – Can companies still access financial support from the EU?

It has been 11 days after the UK has officially left the EU. While many questions remain unanswered, it seems like some light has been shed on what will happen with British applicants when it comes to the EU’s funding schemes… at least for what’s left of 2020.

It has been almost 4 years since the British decided whether their country should remain part of the EU. Back then, the results caught a lot of EU citizens by surprise: the majority of the people in the UK who voted in the 2016 referendum, were in favor of exiting the European Union.

Since then, the UK entered an ongoing negotiation process that has granted them a series of deadline extensions, which resulted in the UK effectively entering the transition period on January 31, 2020.

One of the questions that arise now that the UK is leaving is what will happen with their access to EU’s public funding programs, and what impact will it have on the UK’s business landscape. According to 2019 data from The Federation of Small Businesses in the UK, 99.9% of the business population are SMEs, so we can expect that these companies will be the most affected by the terms of the agreements that the UK and the EU reach by the end of the year.

The EU has always focused on promoting entrepreneurship and ensuring a strong network that promotes the development of the economy, through SMEs in particular. Among all the things they do, the European Commission improves access to new markets and internationalization, facilitates access to finance, provides SMEs with their network of support, and promotes competitiveness and innovation by supporting start-ups and scale-ups in particular.

For EU member states and its associates, funding schemes under the 2014-2020 Multiannual Financial Framework, such as the Horizon 2020 framework, provide support for the development of companies and their innovative projects. Among the programs, the former SME Instrument, now EIC Accelerator, is known to be the one to provide the most support for individual projects. In particular, it aims to help SMEs push through the so-called Valley of Death thanks to non-dilutive funding of up to 2.5M€ in the form of a grant, and up to 15M€ in equity.

The EIC Accelerator has had a great impact on the UK’s business landscape. As of October 2019, 416 companies in the UK have received funding since the program’s kick-off in 2014, making them the 3rd country with the most number of projects funded under the SME Instrument/EIC Accelerator, only surpassed by Italy (617) and Spain (778). 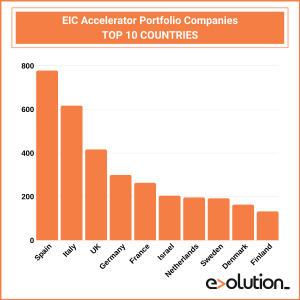 What happens now? The Withdrawal Agreement and its impact on Horizon 2020 applications

It is thanks to the Withdrawal Agreement, (the document submitted and approved by both negotiating parties on the conditions of the transition period of the UK exiting the EU) that we are able to shed some light on what the Brexit implies for companies interested in participating in the EU Programmes financed by the 2014-2020 Multiannual Financial Framework (MFF) such as Horizon 2020.

These terms are favorable for UK companies applying during this year, but British SMEs will have some new constraints, particularly in the EIC Accelerator. They will be limited to applying for grant-only funding (2.5M€), which leaves them out of the program’s latest novelty: the 15M€ equity option. Not only this but according to UK Research and Innovation, a very small number of companies, whose projects have been granted funding but involve the treatment of sensitive data from other EU member states, might have to change the way they operate and are expected to be notified by the European Commission.

It has taken a lot of effort from both sides to reach this arrangement, which will last until December 31, 2020. After almost 4 years of negotiation, and thanks to the Withdrawal Agreement, we are able to know what will happen for now to the relationships between the EU and the UK.

But still, a lot of questions remain unanswered as of what will be of Britain’s future role in the European business ecosystem. Will the EU allow UK companies to access the equity option after the transition period is over? Will UK applicants be admitted to apply to these programs while keeping the same benefits as they have now? Or will the terms be more similar to those of associated countries like Norway or Israel?

We will have to wait and see where the negotiations take us by the end of this year’s transition period!

Is your company UK-based and you want to apply to Horizon 2020 before the end of this year? Do you want to know if your project would be a good fit to obtain funding? Don’t let the uncertainty stop you from achieving your goal! Contact us at info@evolutioneurope.eu and get a no-cost, no-obligation evaluation for your project!